Human Migration – What it is & Types of Migration

Human migration is one of the oldest civilizational processes, man has been moving from one place to another since the dawn of time. Reasons for migration vary greatly, but the overall purpose of the process is for people to move and settle in a better geographical location. The official so to say definition of human migration is the permanent change of residence of an individual or group. However, migration doesn’t cover moves such as nomadism, migrant labour and tourism which are only temporary or transitory in nature. Migration should not be confused with immigration or emigration, which are two distinctly different processes. Migration is something people have been doing for thousands of years. Throughout the ages history has witnessed a number of so called great migrations, the results of which can still be seen today.

There are many factors which help put human migration into different types or categories. Some scientists break down migration into more subcategories, based on specific factors. Others prefer to keep migration explanations as simple as possible. So what types of migration are there? First of all there are:

There are also two other types of human migration known as voluntary and forced migration. Their names are rather self-explanatory, but let’s elaborate regardless:

Science puts an intermediate category of migration between voluntary and forced, and that is migration caused by famine, natural disaster or fleeing war.

The human migrations to have taken place throughout history have transformed the entire aspect of lands, continents, ethnicity and race in much of the world. Migrations have also shaped the linguistic specifics of various regions all over the planet. Take for instance the map of Europe, the Old Continent has been shaped and is the product of several great migrations, particularly those of the Germanics, the Slavs and the Turks (amongst others). In the last four hundred years, the great stream of human migration moved outside from good old Europe, and reached places like North and South America, Australia and much of Oceania, Northern half of Asia, and parts of Africa were colonised by Europeans. In the period from the sixteenth to the twentieth century, over sixty million Europeans migrated and settled outside the continent.

The largest recorded migration in human history was the so called Great Atlantic Migration which saw large masses of Europeans moving and settling in North America. This particular migration began in the eighteen forties, and was spurred by large numbers of people from Ireland and Germany. The second stage or wave of migration from Europe to North America was forty years later, in the eighteen eighties, however this time it was peoples of south and east Europe who were migrating. In the twenty years from eighteen ninety to nineteen ten, more than seventeen million Europeans migrated to the United States alone. By the nineteen eighties, the total number of European peoples to have moved and settled in the United States was about thirty seven million.

Great human migration have not only been to the west, but also to the east. For instance, the great migration which took place in the hundred years from eighteen o one to nineteen ten was toward Asiatic Russia i.e. Siberia. In that first wave of migration toward the east, seven and a half million people moved. The second wave of migration toward the east was between the first and second world wars, when six million people moved to Asiatic Russia voluntarily. The figure excludes the countless deportees and prisoners moved to labour camps by the Stalinist regime. 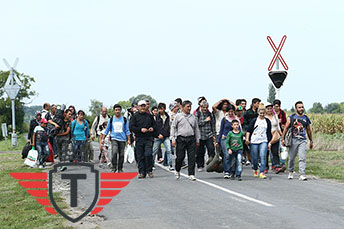 Most of the voluntary human migrations have been caused by economic disparity between geographical regions. In other words, people have moved from underdeveloped to well developed or industrialised countries. For example, since the end of the Second World War, particularly in the twenty years from 1960 to 1980, large masses of people moved and settled permanently in Western Europe. In the same period, over ten million European immigrants were legally admitted in the United States as permanent residents. Illegal immigrants finding their way in the states also number in the millions, however majority of them do not originated from Europe, but rather from South America and Asia.

The ugly side of migration

Unfortunately, humans have a tendency to hate and use each other, which has been the reason for many of the world’s so called forced migrations. Ethicists might view forced migrations such as slavery and mass expulsion as stains on world history, and they wouldn’t be wrong in doing so. The largest forced migrations in history are:

Internal migration in the twentieth century has been dominated by the trend of moving from rural to urban regions. In result, developing countries have experienced rapid growth of urbanised areas due to migration from rural areas.